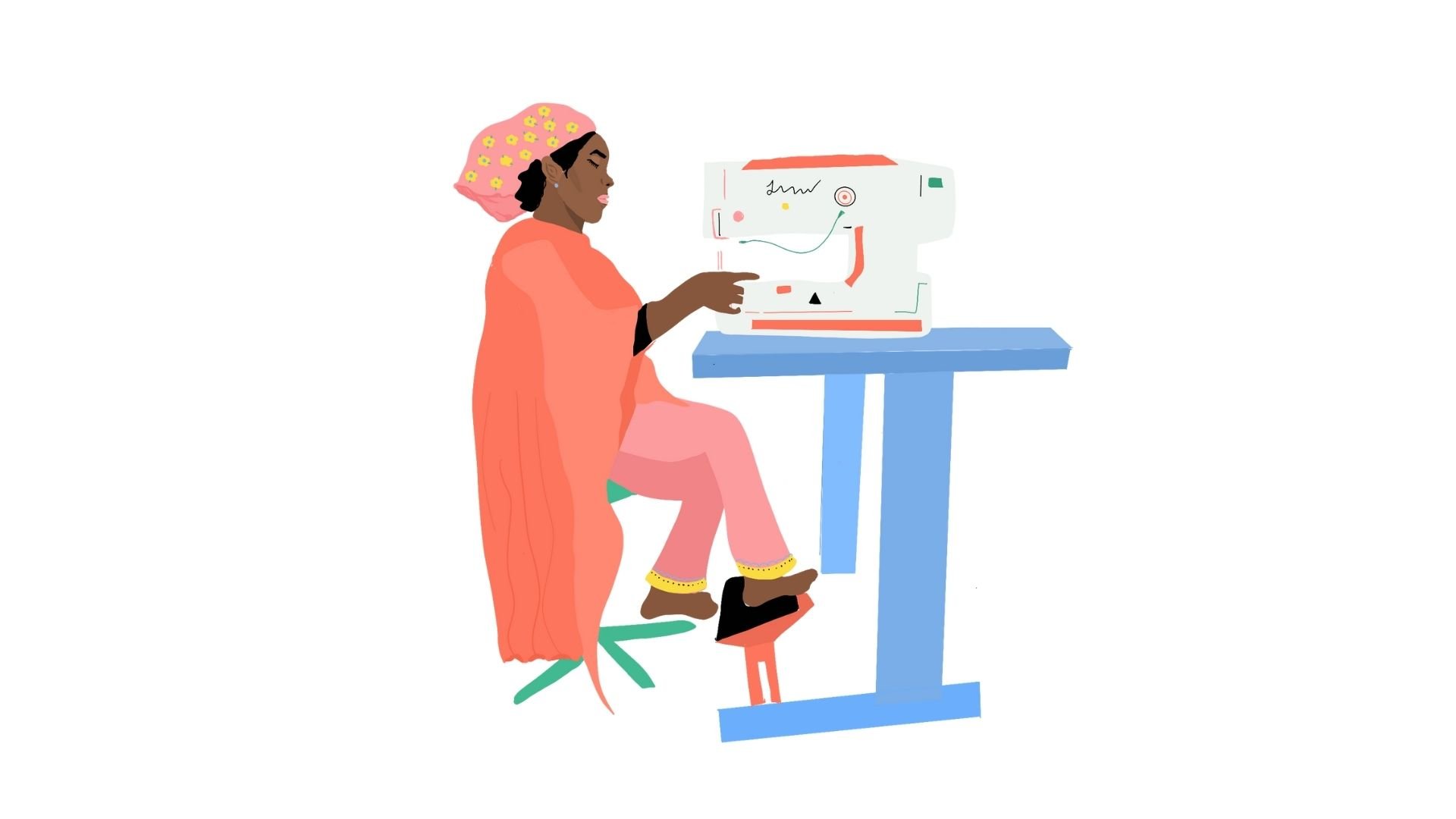 This past summer, the safety of Bangladesh’s garment factory workers hung in the balance as representatives from global trade unions and major apparel brands negotiated if there would be a future for the Bangladesh Accord on Fire and Building Safety — an expiring agreement that had monumentally assisted with the safety of garment workers and upkeep of factory conditions for the past eight years. On August 25th, 2021, celebration erupted as a new, two-year binding agreement was finally accepted to both renew and expand the life-saving Accord.

The agreement, renamed International Accord for Health and Safety in the Textile and Garment Industry, contains the key elements that made the Bangladesh Accord so successful in the first place: rigorous inspections of garment factories; the agreement from brands to limit their orders to factories that are committed to operating safely; the agreement from brands to pay factories prices that enable them to afford to operate safely, including affording the cost of necessary building renovations; the agreement of shared governance by labor and brands; an appointed safety committee and worker awareness programs; an independent complaints mechanism; the transparent reporting of Accord matters to all interested parties including workers and consumers; respect for freedom of association; and legal enforceability of brands’ commitments.

The Accord’s new name also highlights two key features within the new agreement: signatory support and no third-party interference when a worker lodges a complaint about a health or safety issue, as well as the development of at least one Accord-based safety program in another country over the next two years.

EXPANDING THE ACCORD’S DEFINITION OF SAFETY

The Bangladesh Accord on Fire and Building Safety first emerged in 2013 in the wake of the Rana Plaza collapse and the Tazreen factory fire, a time when Bangladesh had the highest rate of garment factory deaths in the world, most of which involved fires and building collapses. Eight years later, Accord inspections and worker programs have so diligently monitored fire and building safety in the 1600 Bangladeshi factories under its watch that “there has not been a single case of workers dying en masse as a result of a garment factory’s failure to meet those Accord covered standards,” said Scott Nova, Workers Rights Consortium (WRC) Executive Director at a media briefing on the International Accord and Pakistan organized by Clean Clothes Campaign (CCC).

Christie Miedema, Campaign and Outreach coordinator for CCC, explained in a recent interview that even though the safety parameters of the International Accord do not include broader labor rights issues—like wage theft—that affect worker safety, this new agreement does expand  the 2018 Bangladesh Accord’s fire and building safety mandate. “The title itself indicates the mandate, which is further filled in by the Accord’s Steering Committee,” made up of representatives of union and brand Accord signatories. “In 2018, the agreement focused on fire and building safety, while the International Accord mandate is health and safety in general.”

According to Miedema, the complaint mechanism is  “able to respond to any health and safety complaints, not only building safety and fire. Workers have complained about things like excessive overtime, which constitutes a health risk, as well as lack of maternity leave and other health related issues,” including, beginning in 2020, COVID related issues. “The complaint mechanism has responded to that. The new Accord has been renamed because it’s also the new reality we’re living in — factory building safety right now is also about keeping one and a half meter’s distance between desks. The International Accord is just adapting to changing times and also, maybe, ongoing progress in what can be addressed. If you come a long way on building safety you have more space to look towards other safety issues.”

EXPANDING THE ACCORD Agreement TO other countries

Oldenziel also shared: “[Given] the history [the International Accord Secretariat] has of engagement with stakeholders from Pakistan, interest from Accord brands—many brands expressed interest — to have the Accord also operate in Pakistan, it makes a lot of sense for us to at least also look at Pakistan as a priority country, but we will also be looking at other countries like India, Vietnam, Cambodia, possibly Turkey, Egypt, and Morocco.”

There is no doubt that an Accord on Health and Safety is needed in Pakistan. Fatal garment factory accidents like The Ali Enterprises factory fire in Karachi in 2012, which took the lives of 260 workers, continue to this day. In 2021, from January through August, 27 garment workers were killed and 62 injured due to factory fires, insufficient or locked or barred exits, faulty electrical wiring, chemical leaks, and collapsed buildings.

In 2012, the Ali Enterprises factory that burst into flames was not registered with any government department, including the labor department. The factory was running without permission from the Ministry of Industry and Ministry of Labor.

Nasir Mansoor, General Secretary of the National Trade Union Federation, Pakistan, recounted the story at the CCC press briefing. “The exit gate was permanently closed down. There was not a single alarm on any floor. The factory was working illegally and an audit certificate was issued to that factory.  The workers didn’t have the union over there, workers weren’t registered with the Social Security Institute. It was a breach of not only local laws but international labor standards and ILO conventions.”

“After a passage of nine years there were no lessons learned,” said Mansoor. In August 2021, The BM Luggage Industry fire in Karachi that left 17 dead, occurred in a factory operating illegally on a residential plot and was neither registered or inspected.

Karamat Ali, Executive Director of the Pakistan Institute of Labour Education and Research, who was also part of the CCC press briefing, stated, “We have a very good law which was formulated in 2017, the Health and Safety Act in the Province of Sindh, but there is no implementation. The inspection systems are horrible. We are told that there are only 541 inspectors in the whole of Pakistan and there are close to 150,000 workplaces. After the 541 inspectors conduct [a first] inspection this year, it will take them 100 years for the second inspection of the same factories.”

Mansoor added: “The brands are violating, audit companies are violating, the Pakistani government, the local industrials and the labor department are breaching all the labor laws and safety and health standards in the factories.” According to Zehra Kahn, General Secretary of the Home-Based Women Workers Federation, Pakistan, pandemic safety issues have also been left unaddressed in Pakistan’s garment and textile sector.

“Arrangements had to be made in the factories to provide sanitizers and masks for the workers or the installation of the sanitizer gate, but it was not implemented in the factories properly. There was a law prohibiting employers from laying off their workers during the lockdown and ensuring the payment of salaries, but in spite of that law, many workers were fired from their jobs. Owners and brands have not come forward to help their workers, neither economically, nor [by ensuring that] health and safety measures are taken to protect them. Workers are still working in unsafe conditions. Even the state and government failed to protect workers’ livelihoods or improve workplace conditions. People here were left at the mercy of the virus.”

Accountability is a major problem in Pakistan’s textile and garment industry, as revealed by a 2019 report on safety in Pakistan’s apparel and textile industry by Clean Clothes Campaign, International Labor Rights Forum, Labour Education Foundation, the National Trade Union Federation, and the Pakistan Institute of Labor Education and Research. The sector employs approximately 2.2 million workers. The country receives about half of its export earnings from the products these workers make. The United States is the top importer of these products, followed by the U.K., Germany, and China. Bangladesh and other members of the European Union round out the top ten countries importing textiles and clothing from Pakistan.

Of the international brands and retailers that publicly disclose the names of their Pakistani supplier factories, H&M, Adidas, Åhlens, C&A, Esprit, Intersport, New Look, NEXT, Stadium and Zeeman have signed the International Accord. Brands that have never signed the Accord, like Walmart and IKEA, do not disclose their supplier factories, although import database searches from 2019 showed show “at least 18 factories in Pakistan producing items for Walmart,” and “four factories in Karachi and Lahore sending large shipments of textiles to IKEA stores in the U.S.” Many brands share supplier factories, which means that a factory may produce for both transparent and non-transparent brands, making it easy for non-transparent brands to shirk responsibility for the health and safety of the workers who make their apparel and textiles.

In 2018, leaders and representatives of Pakistani unions and labor organizations agreed that the health and safety situation in Pakistan is similar to Bangladesh’s predicament before the advent of the Accord in 2013, and that a Pakistani version of the Accord was needed. They developed a declaration in 2019 to push for a legally binding Pakistan Accord on Health and Safety based on the Bangladesh Accord. Two years later, at the CCC media briefing, Kahlid Mahmood, Director of the Labour Education Foundation, Pakistan, stated, “We are ready and willing to talk to the International Accord, the government of Pakistan, the employers in Pakistan, to create an environment to discuss together how we can work together to have a Pakistan Accord for the textile and garment sector.”

And yet, transparency remains a key issue for brands working with Pakistan’s textile and apparel industries. “As soon as brands sign the Accord,” says Miedema, “they have to be transparent at least towards the Accord secretariat about what factories they produce in. All those factories will be covered by the Accord. Of course, if a brand doesn’t know that a certain factory is subcontracting — it should put in the effort to know — but if it doesn’t, or if it chooses not to know and not to report to the Accord, there will be no Accord coverage there.”

“I fear that workers will often be in that situation and that is very problematic. Nevertheless, it might help to have a complaint mechanism, not only to save lives, but if [a worker] can prove through a complaint mechanism that they are producing for a certain brand that is an Accord brand, it might be that a complaint mechanism can actually step in and mediate with that brand. There might be options open—but this is all speculation because we don’t know what an Accord [will look like in Pakistan]. It can’t look the same in every country. We’ve known that from the beginning; there are national differences.”

As of October 29, 148 brands and retailers have signed the International Accord, according to the CCC brand tracker. “I think everyone can check the brand tracker,” says Miedema, “and call any brand out, because it’s updated every day. If brands are not there, they haven’t signed. Feel free to call them out.”

Stay in the know on Accord updates

Alison Morse is the author of the limited edition chapbook The Price of Our Clothes (Perlman Museum) as well as the flash fiction collection If You Wave A Chicken Over Your Head (Red Bird Chapbooks). Her articles, poems and prose have been published widely in literary journals, magazines and anthologies. Alison, the proud descendant of immigrant garment makers employed in N.Y.C., is currently at work on a multi-media project about the garment industry, for which she travelled to Bangladesh to do research.

We send out once-a-month updates packed with free sustainability resources, information on our advocacy campaigns, and the latest ethical fashion news.